I first met John McCain in 1987, when he was an Arizona Senator, in the early days of his political career. I had been in the military; it was something that we shared in common. I met with him and his staff on several occasions, both on behalf of Applied Materials and while on the board of SEMI. Senator McCain’s passing late in August has given us the opportunity to reexamine the state of politics in America. It has also given me the opportunity to reflect on how he demonstrated some of the principles from my book Applied Wisdom.

McCain impressed me. He was interested in the success of the high tech industry in the United States and globally, and also in aerospace and defense. He was very direct, but balanced the directness with a good sense of humor. As chairman of the Senate Commerce Committee, from 1997 to 2001, he held numerous hearings on global warming, and co-sponsored legislation with Senator Joe Lieberman to curb greenhouse-gas emissions.

Through his long political career McCain seemed to harken back to an earlier era in American public life, marked less by partisanship, and more by a genuine concern for the issues that were most important. He was known throughout his career for a willingness to reach across the Senate when necessary, working with Democrats to advance important causes. 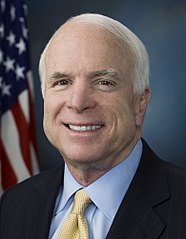 Not everyone agreed with his views, even some of his closest friends. But many more admired his willingness to speak out across party lines in support of his country. Few Republican politicians are willing to speak up against the views of our current president. This was not the case with John McCain, who crossed swords with Donald Trump on multiple occasions.

Everyone who followed McCain’s career, even slightly, was aware of his time as a POW during the Vietnam War. For five and a half years he endured beatings without adequate medical treatment. He was kept in solitary confinement for two years. In the midst of his captivity he was offered a chance for early release before his fellow prisoners. But, according to the military Code of Conduct, prisoners must not accept special favors and McCain turned down the chance to end his suffering. And so he was tortured. He was finally released in early 1973, with permanent injuries. When considering McCain’s achievements, his bravery under the most extreme conditions is impossible to ignore.

In reflecting on Senator McCain’s life and career in the military and in politics, I am pleased to see his validation of some key principles from my book Applied Wisdom. You can’t build an organization, whether public or private, without respect for all of the players. McCain had an ability that is essential to organizational success, a willingness and an ability to collaborate, cooperate and compromise.

Politicians often talk about cooperation and collaboration, but just pay lip service to the practice. McCain put it into action. In a 2017 speech he spoke of himself and Joe Biden: “We believed in the institution we were privileged to serve in,” he said. “We believed in our mutual responsibility to help make the place work and to cooperate in finding solutions to our country’s problems.”

Perhaps one of the greatest testimonies to Senator’s fidelity to these principles was the fact that he chose two former political rivals to speak for him at his funeral. President Barack Obama and President George W. Bush were two men whom Senator McCain ran against and lost in bids for the Office of President of the United States. Though he was defeated by both he continued to work with and support them from his role as a U.S. Senator.

At his memorial, he was characterized as a man “who put country first, who prized service ahead of self, who summoned idealism from a cynical age.” He showed “a largeness of spirit, an ability to see past differences in search of common ground.” And, as President Obama said, “he did understand that some principles transcend politics, that some values transcend party.”

I think that John McCain represented all of the things that have been spoken about him: courageous, honorable, strong, honest. A leader.

We are going to need more people like John McCain.

A Crisis at the Silicon Valley Community Foundation